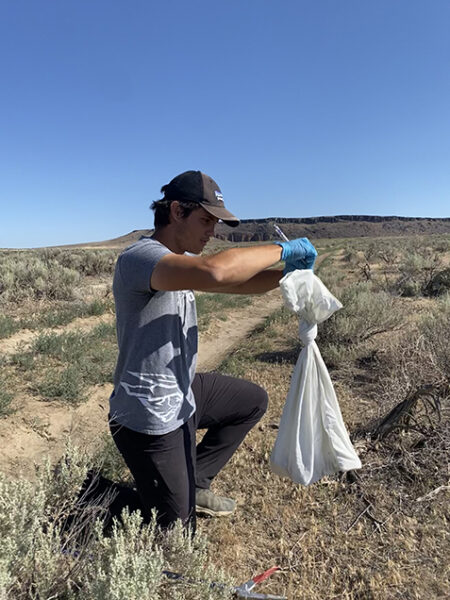 If it involves dirt and the great outdoors, Caleb Shackelford probably loves studying it.

The senior biology major spent the summer be­fore last snake hunting in the high desert near Boise, Idaho, as a summer intern with the U.S. Geological Survey. Climbing over rocks and through shrubs, he caught rattlesnakes, striped whipsnakes, and go­pher snakes, swabbing each to test for snake fungal disease. This past summer, Caleb spent his days growing and tending a patch of prickly “weesatch” plants to study the bacteria on their invasive root systems. It was part of a two-year research project he is working on as a research assistant with Dr. Kathleen Wood, chair of the biology department. He was thrilled when he learned about the project.

“Soil has always interested me. It fascinates me. It’s kind of a nerdy thing to be interested in, but it's amazing how diverse soil is and how there’s a huge web down there, a big ecological system that we don’t see,” said Caleb, who will graduate in De­cember. For graduate school, he plans to study soil science/chemistry at Texas A&M University, where he will research rhizosphere interaction and carbon sequestration.

His research at UMHB has earned him some notoriety when he presented at three conferences and won top prizes at each — two first-place wins in microbiology at Heart of Texas last year and again this year, and first place in plant biology at the Texas Academy of Science Conference. 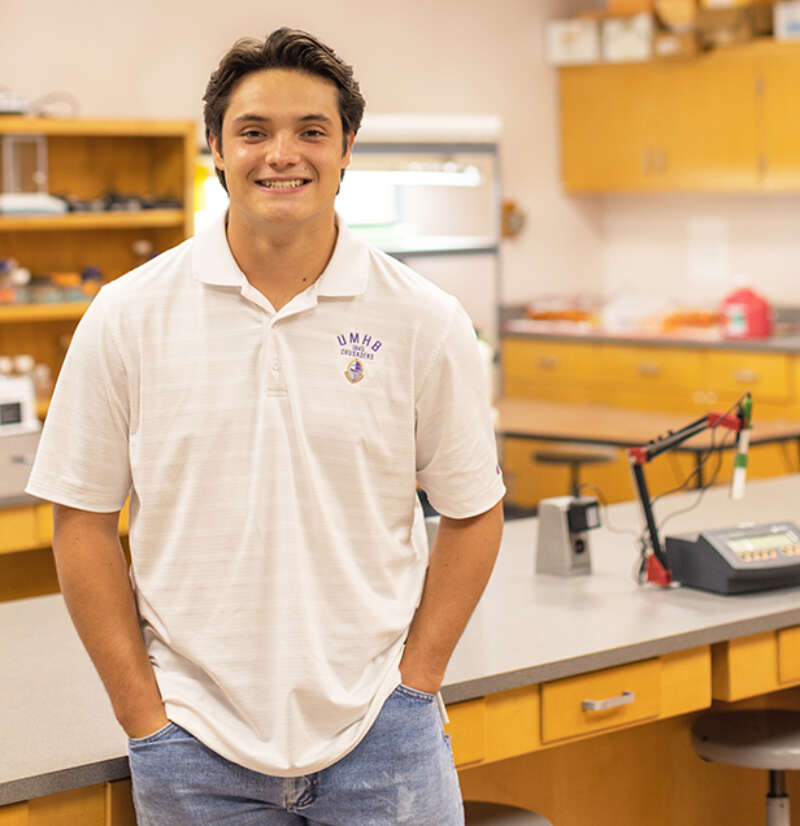 Since these conferences are regionally based, he competed against students from much larger re­search schools, including the University of Texas and Baylor University.

“I was really proud of getting first place, not be­cause of me, but because I was representing UMHB in this way. I want to be the best for UMHB,” said Caleb.

Presenting at conferences looks good on a resume, but to him, it’s more about being a good researcher and communicator.

“The goal of conferences is not necessarily to see who’s the best. It’s to teach, especially undergradu­ates,” he said. “When you’re in the field of science, you need to know how to share ideas. Conferences teach us how to be a good communicator of the research we’re doing.”

Caleb had no idea that getting an opportunity to do research as an undergrad would set him apart from the crowd, but it did when he applied for the summer internship position with the U.S. Geological Survey.

“I remember talking to the people who hired me at the USGS and asking them why they hired me. So many people apply, and I was just a random ap­plicant from Central Texas, which is not even close to Idaho,” he said. “They told me it was because of my research experience. Other students didn’t really have that. I feel like I’m very fortunate to go to a university that is the perfect size to give me these opportunities.”