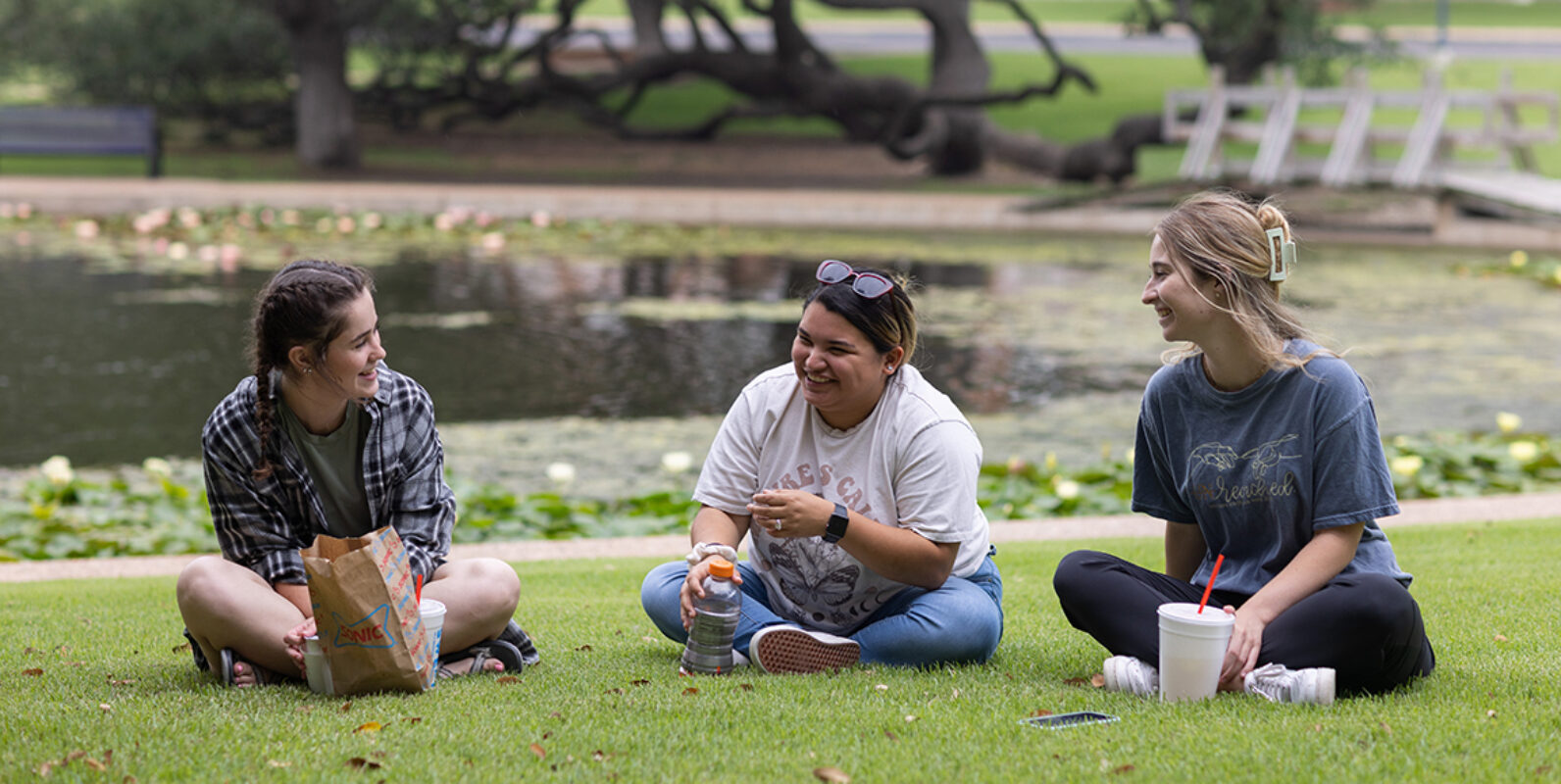 She's a Treasure Beyond Measure 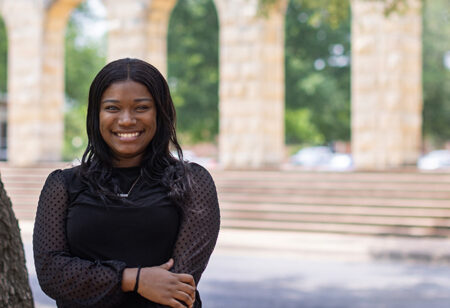 When you talk to Treasure Unique Hines, you can tell there is something about her that is just as special as her name. Maybe it’s her spirited energy or the way she beams when she talks about her days at UMHB. Treasure’s confident yet humble presence makes it obvious she was meant to do something transformative with her life, and that’s exactly what she plans to do. Treasure, who graduated this May with a degree in social work, is headed to graduate school to become a forensic social worker to help children who have experienced or witnessed terrible situations, such as human trafficking, abuse, domestic violence, and even murder.

The Linden, Texas, native didn’t always want to be a forensic social worker. She had her sights set on nursing, one of the things that attracted her to UMHB. She said she had long dreamed of being in a “helping” profession and thought nursing was perfect. Her mind was opened to countless other career possibilities after she met some social work students, and her heart soon told her that helping children was the path for which she was destined. 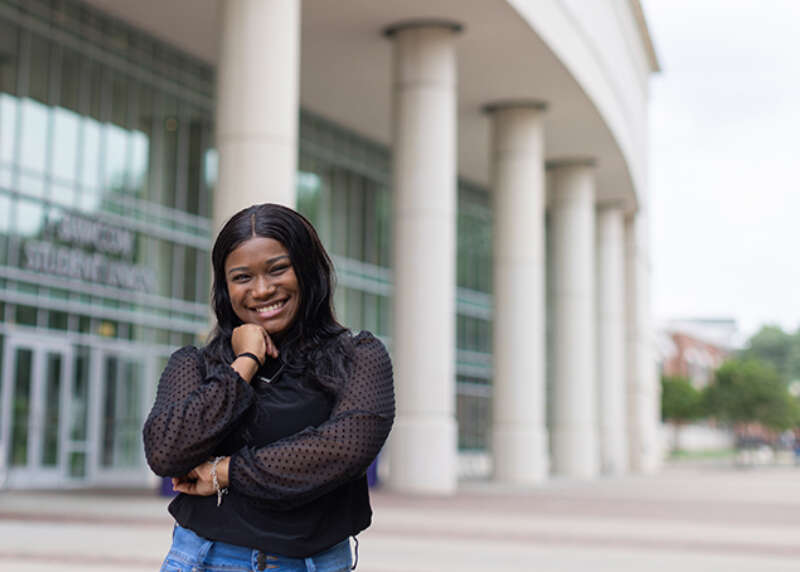 “The things some children have experienced are hard to hear, but I view them as things that have happened in the past. What can I do to help that individual overcome it and move on?” she said. “I will help children learn to work toward new goals—not to forget, but to learn from what happened to them and be better.”

While completing an internship at the Children’s Advocacy Center this past semester, Treasure witnessed forensic interviewers and learned it takes communication and listening skills to help a child feel comfortable enough to open up.

“It’s about bonding and building a rapport, building that emotional connection to individuals who have experienced trauma and opening their minds and making them comfortable to talk about these hard topics,” she said. “Sometimes with children it’s hard, and they don’t want to talk to strangers, so just getting them comfortable enough to talk about that traumatic situation pulls my heartstrings.”

Coming to UMHB from a split family and as a first-generation student, was a struggle, Treasure said—both with figuring out her path from nursing to social work and learning how to study. On top of being a new student, she lost her grandpa in 2018. Her first semester was an eye-opener, and she found herself on academic probation when her GPA fell below 2.5. However, Treasure knew she had what it took to be successful; after all, she had graduated fifth in her high school class! Treasure quickly found her way and began to flourish, and every semester since that first, her name was listed on the dean’s or provost’s honor roll. She was thrilled to finish her bachelor’s with a 3.6 grade point average when she graduated in May. Now, she’s headed to Baylor University to complete a master’s degree and perhaps even get a doctorate.

“I’m one of those people who never want to stop learning,” she said. 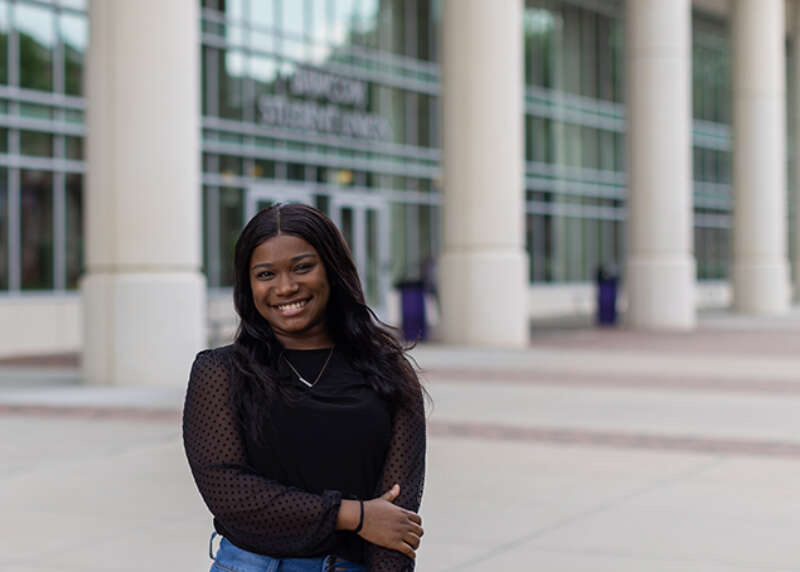 Just before her last semester at UMHB, she feared her college career could end before she could graduate. She was maxed out on student loans and owed unexpected tuition she didn’t have the money to pay. The financial aid department stepped up and told Treasure to apply for additional scholarship money. Thanks to donors, she received the money she needed to finish her last semester.

“It was a big relief because I was scared I wouldn’t be able to graduate,” she said. “I was so thankful they helped me and got those extra scholarship dollars. I don’t know what I would have done without it!”

While at UMHB, Treasure participated as a cheerleader, was president of Phi Alpha honor society for social work, and was a member of Psi Chi honor society for psychology. She also had an opportunity to speak at several functions about social work and served as a speaker on a panel to share her experiences at UMHB.

“I gained a real connection here at UMHB with amazing relationships,” she said. “Professors here want you to succeed and be great at the things you do. I truly love this school.”

Her professors and staff members loved her as well, including Dr. Kerry-Ann Zamore-Byrd who said she couldn’t be prouder of Treasure who has “blossomed into a confident student who is ready for graduate work.

Aaron Rodeffer, who Treasure describes as her “dad away from dad” is also proud of her, but sad to see her leave. For four years, Treasure worked at Bawcom Student Union for Rodeffer, the director of facility operations. After realizing her potential, he promoted her from front desk attendant to student supervisor.

“Treasure will be greatly missed,” he said. “She took ownership of our workforce and was dedicated to helping all the other student workers be successful. She took great pride in her work!”

As for her name, she said her father was the one who chose Treasure Unique. She was their first girl born, following four boys. “They were waiting on me,” she said with a giggle. “I was the only girl—their treasure.”