Student Sees 'God in Control' Even as She Fought Childhood Cancer 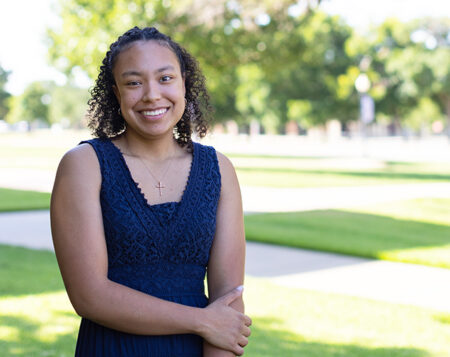 When other five-year-olds were starting kindergar­ten, Macaiah Peterman was stuck in a hospital bed. After going through countless rounds of what doc­tors thought were reoccurring ear infections, they finally discovered Macaiah had a rare type of cancer in her right ear called rhabdomyosarcoma (RMS).

So instead of storytime, show-and-tell, recess and field trips, for Macaiah, it was long weeks in a hos­pital bed, IVs and needles, surgeries and chemother­apy that made all her curly hair fall out. Left with a vulnerable immune system, being around other children was out of the question, so a teacher came to her house for her first five years of her schooling, and she had only her parents, Gimel and Tammy, for companionship.

Not all the memories of long days in a hospital bed are unhappy, though. One of her favorites is of her dad sitting by her bed watching television shows with her.

She and her father, who was a pastor and in the military, spent long days talking about each charac­ters’ personalities, attitudes and actions. The discus­sions soon became a game to see who could best analyze the behaviors of each character. Figuring out what made them tick was so fascinating to Macaiah, and it eventually led to the discovery of her purpose in life — to pursue a degree in psychology and one day help people navigate their relationships.

“It’s really fascinating to me how our minds work and how past experiences with parents, or how someone grew up, can affect how our relationships work,” she said.

Her father also taught her at a young age that even though she didn’t get the chance to make friends to talk to, she could always talk to God.

“I just felt like He was my friend,” Macaiah recalls. “When I would feel really sick from the chemo, I would pray for Him to help me fall asleep, and I would fall sound asleep and have the best dream ever.”

When Macaiah was finally able to go to school, around fourth grade, it wasn’t always easy making friends, and she often found herself just sitting back and observing other students. Something about her soft-spoken demeanor drew them to her though, and she discovered her gift of listening.

“One thing I learned, being the quiet kid, is that people just want to be heard and listened to. Some­times, they don’t want a resolution. They just want you to listen,” she said.

Macaiah has loved her time at UMHB and says her professors inspired her to hopefully teach one day, as well as have her private practice.

“All of my psychology teachers are amazing. I love them so much!” she said. “It’s so good to hear what they do on a daily basis. They give so many real-life examples that they have experienced and use critical thinking skills.”

Even though she missed out on so much as a child, Macaiah knows God was in control the entire childhood as she fought and beat cancer. She learned to lean on Him for guidance and friendship, and she hopes He will speak through her to her pa­tients one day. “I definitely would like to be a vessel for God.”