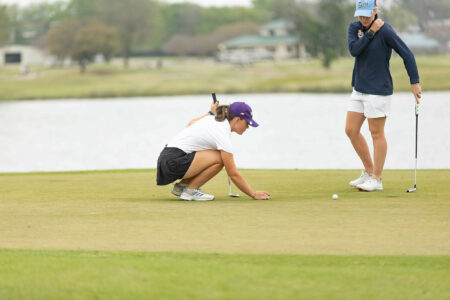 BELTON, Texas—Last Friday, the University of Mary Hardin-Baylor's Board of Trustees approved the construction of a golf clubhouse designed by one of the most widely-acclaimed sports venue designers in the world, Earl Santee of Populous and a practice facility to include three holes and additional short-game practice areas designed by legendary golfer and world-renowned golf course architect Ben Crenshaw. This new facility will be located on UMHB's campus, west of Nolan Creek.

"Our men's and women's golf programs have a proud, consistent history of excellence that has resulted in a championship culture for both teams," explained UMHB Vice President for Athletics Dr. Mickey Kerr. "I am very excited for our current and future players to have a first-class practice facility and clubhouse that will have its home on our beautiful campus. Our coaches will also benefit from superb teaching opportunities associated with these incredible venues."

Ben Crenshaw, a native Texan who calls Austin home, is a Hall of Fame golfer who enjoyed an illustrious playing career that spanned three decades with 19 PGA Tour victories, including the 1984 and 1995 Masters. Crenshaw has always appreciated the design and construction of golf courses worldwide, which led him to pursue his love of golf architecture. Crenshaw and his business partner Bill Coore, operate Coore & Crenshaw architectural firm and have created some of the game's most esteemed courses over the past 30 years, including Sand Hills Golf Club in Mullen, Nebraska, Bandon Trails and Sheep Ranch at Bandon Dunes Golf Resort in Oregon, Kapalua Plantation Course in Maui, Hawaii, and Cabot Cliffs in Canada.

"Wow, what an honor it will be for our ladies to train in a top-notch practice facility created and designed by Ben Crenshaw, a legend in the game of golf," said Women's Golf Head Coach Jackie Ralston. "This will certainly be a game changer that elevates UMHB's golf program both within our conference and at the national level. It will attract many talented players to consider UMHB when looking for a university that offers opportunities of excellence on the golf course and in the classroom."

The UMHB Golf Clubhouse will be designed by architect Earl Santee of Populous, the university's campus master planner. Santee is a visionary known for his intuitiveness and insightfulness. Throughout his more than 30-year career, Santee has developed a portfolio of award-winning venues such as Yankee Stadium in The Bronx, New York, Target Field in Minneapolis, Minnesota, Minute Maid Park and NRG Stadium in Houston, Texas, and UMHB's Crusader Stadium, which opened in 2013.

"I am so grateful for the vision of our university leaders and their dedication to excellence in all things," said Men's Golf Head Coach Jordan Cox. "Having world-class designers like Ben Crenshaw and Earl Santee working on this project is mind-blowing, especially when you see how excited they both are about working together for UMHB. I cannot wait to see the dream of this facility come to fruition."

The men's golf program began in the early 1970s and has won the American Southwest Conference championship nine times. The women's golf program was founded in 1996 and won the NAIA National Championship in 2000. The program has won the American Southwest Conference Championship 13 times and was the first UMHB athletic program to win an NCAA Division III National Championship in 2013. The university anticipates the new practice areas will be completed and ready for use in the fall of 2023. To learn more about Cru Athletics, visit cruathletics.com.