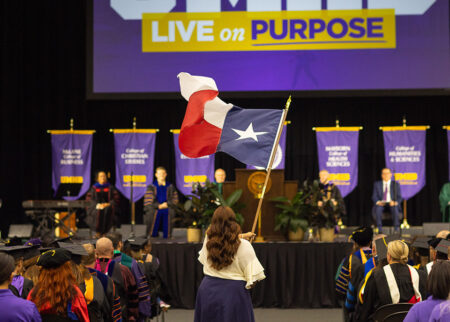 BELTON, Texas—The University of Mary Hardin-Baylor celebrated the beginning of the school year and welcomed more than 750 new freshmen to campus during its 177th Fall Convocation service on Aug. 10.

This year, over 3,500 students aged 15 to 72 are attending classes at UMHB. In opening remarks, UMHB President Dr. Randy O’Rear said when the college began in Independence, Texas, in 1845, only 24 students were attending the first classes. He also noted that 564 UMHB students are the first in their families to attend college this year.

After UMHB faculty proceeded into the Frank and Sue Mayborn Campus Center arena, there was a parade of flags representing each of the 33 countries and territories around the globe and 41 states around the nation from which UMHB students have journeyed to campus this year.

In his address to the packed arena, Dr. Joe Loughlin, lead pastor of First Baptist Church in Temple, shared God’s three-fold purpose for our lives with the UMHB community. “Each of you is placed here for a reason, just as God wanted.”

He offered tips for fulfilling God’s purpose and shared Jeremiah 29:11. “For I know the plans I have you, declares the Lord, plans to prosper you and not harm you, plans to give you hope and a future,” said Loughlin. He then closed with these words from author Dallas Willard, “God isn’t interested in what you accomplish or achieve so much as He is interested in the person you become.”

Joe and his wife, Val, are in their 39th year of marriage and ministry together, and he currently serves as Lead Pastor of First Baptist Church in Temple. Joe has degrees from Dallas Theological Seminary (Doctor of Ministry), Southwestern Baptist Theological Seminary (Master of Divinity), and Howard Payne University (Bachelor of Arts in the Honors Academy). He and Val, a 1986 graduate of the University of Mary Hardin-Baylor, are empty nesters with three adult children and a dog named Buzz. Joe also serves as a member of the UMHB Board of Trustees.