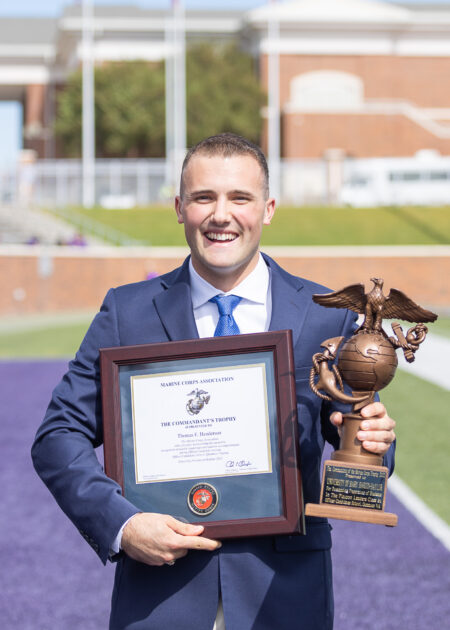 BELTON, Texas—University of Mary Hardin-Baylor (UMHB) senior Christian Studies major Thomas Henderson was presented with the United States Marine Corps (USMC) Commandant Trophy for outstanding leadership and superior accomplishments on Saturday, October 22 in a pre-game ceremony at Crusader Stadium. Henderson is from Keller, Texas, and is the son of Jerry and Penny Henderson. An active leader on the UMHB campus, Henderson serves as the Student Foundation president, student leader for 33 Authentic Manhood, and has served in other ministry roles in the community.

“We are really proud of Thomas’ outstanding accomplishments and dedicated service to his university, community, and country,” said Vice President for Student Life Dr. Brandon Skaggs. “He’s a bright young man with a remarkable future. We can’t wait to see how God’s call on Thomas’ life will impact the world!”

In the spring of 2021, Henderson was selected for the Platoon Leaders Class Program, an undergraduate commissioning program that allows full-time enrolled college students to pursue a commission in the U.S. Marine Corps without interrupting the academic school year. He attended Officer Candidates School the past two summers in Quantico, Virginia. Throughout the six weeks of training, he distinguished himself and ultimately finished first over 223 other graduating candidates from Lima Company and was selected as their honor graduate. Though hundreds of candidates from across the country trained at OCS this summer, Henderson is one of seven to be recognized with The Commandant’s Trophy.

“The most significant thing about this award to me was seeing how proud my parents were. I remember first finding out that I would receive this award. I was so overwhelmed with emotions,” Henderson said. “I truly know God was with me during my time at Officer Candidate School. Yes, I worked hard and put a lot of effort forward, but I recognize God was working in me and through me.”

In addition to the framed certificate Henderson received, the University of Mary Hardin-Baylor received a trophy in recognition of the outstanding preparation of students.

“I have greatly appreciated the influence UMHB has had on me to prepare for training,” Henderson continued. “Through my relationships with mentors, including Jason Palmer and Daniel McAfee, and the different roles I have had in Student Foundation and 33 Authentic Manhood, I have learned more about leadership than I could have imagined. So, I am very grateful that the trophy was presented to the university because it represents how influential UMHB has been in my life.”