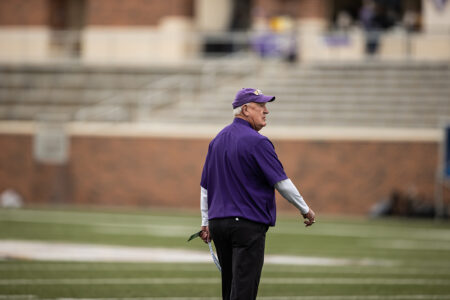 “Fredenburg Field” will be mounted on the brick wall behind both end zones. In addition, permanent plaques will be installed recognizing Coach Fredenburg’s remarkable accomplishments.

“Wow! What an incredible honor and tribute to all the players, coaches and staff who sacrificed and dedicated themselves to hard work and the pursuit of excellence,” Pete Fredenburg said. “Our successful journey would not have been possible without them and the support and guidance of our faculty, staff and administration. Our football program is also indebted to the many parents and fans who believed in us over the last 24 years. I will always be humbled and grateful for this recognition and our wonderful years at Mary Hardin-Baylor.”

Coach Fredenburg launched the UMHB football program in 1998 and quickly led the Cru to its first national championship appearance in 2004. He accumulated a 231-39 record with 17 American Southwest Conference titles and 17 NCAA postseason appearances. Fredenburg coached 163 all-Americans, 125 all-region selections and 417 all-conference athletes. He is a five-time national Coach of the Year and was inducted into the Texas Sports Hall of Fame in 2018. Fredenburg guided UMHB to the national championship in 2018 and capped his historic career with a perfect 15-0 season and another national title in 2021.

“Pete Fredenburg arrived on the UMHB campus from day one with a plan to develop a football program and take it to national prominence,” Vice President for Athletics Dr. Mickey Kerr said. “He nurtured this program and guided it to unprecedented success. Going forward, Fredenburg Field will always serve as a reminder of the goals set for the Cru Football program and a tribute to the coach who built it.”

Coach Fredenburg boasted a 51-3 record inside Crusader Stadium with six undefeated at-home seasons. UMHB opened the state-of-the-art facility in 2013 with a 35-7 win over Wesley College.