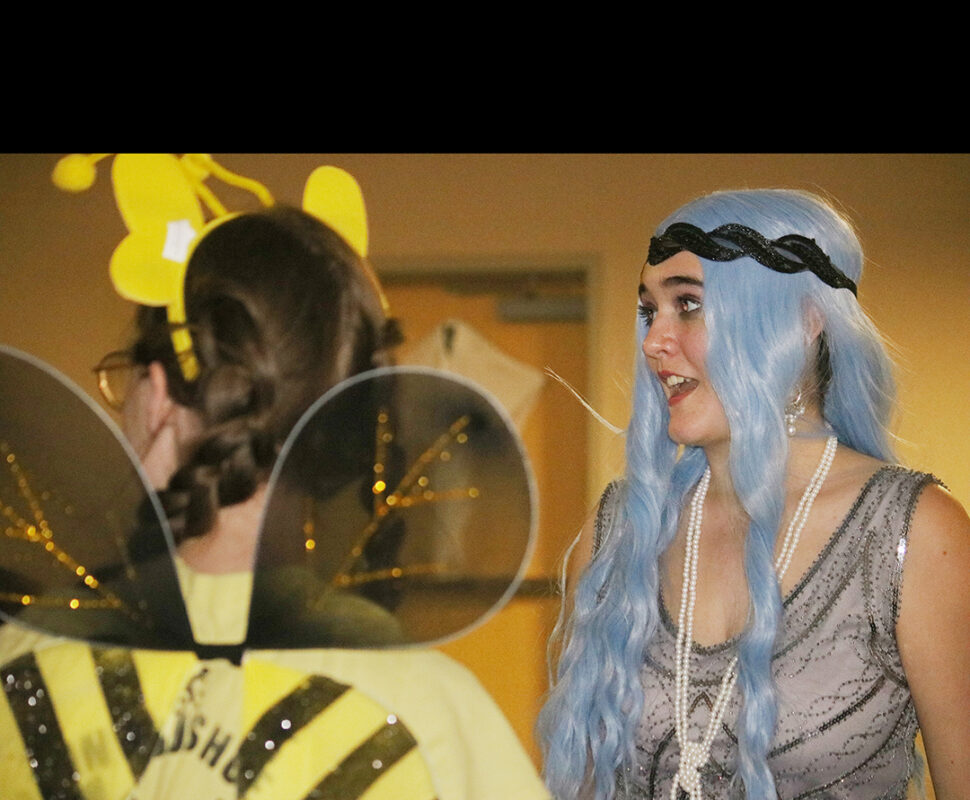 / The Bells / Creepin’ it Real on Halloween

Creepin’ it Real on Halloween 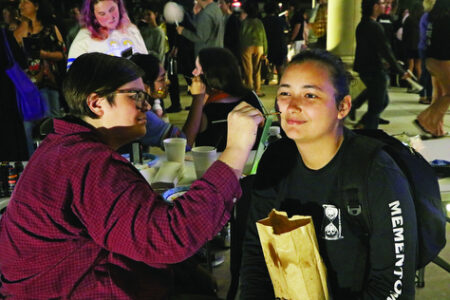 By Rachel Daugherty and Allyson Hinkle

The annual Poe Party, put on by UMHB’s English Club, took place from 6-8 p.m. on Thursday, Oct. 20 in the Lord Confer­ence Center. The party, named after Edgar Allen Poe, featured a variety of fun activities and food for everyone to enjoy. Pizza was provided, as well as caramel apples with marshmallows, choc­olate chips and sprinkles.

After eating, there was time to paint one of the many pumpkins that were provided while waiting for everyone else to finish their food. To really kick off the night, all the English Club officers read sections from Edgar Allen Poe’s classic poem, “The Raven.”

Once the reading was finished, a costume contest featured different catego­ries including: scariest cos­tume, most creative, most spirited, and best overall costume. Each of the win­ners received a $10 Chick- Fil-A gift card as a reward.

Moving on from the costumes was the classic “Faux Poe” contest, where people were able to submit their own renditions of “The Raven.” These submissions were then judged by a panel of seven judges, ulti­mately providing a winner. The winner of this con­test received a special copy of all the works by Edgar Allen Poe.

Once the contests were over, a Kahoot!, as well as other games, were played until the end of the party.

On Tuesday, Oct. 25, there was a Halloween Happenings concert at the Performing Arts Center at 6:30 P.M. This concert was the first of three that happened throughout the week, with two children’s concerts on Wednesday, Oct. 26 and a costume recital on Thursday, Oct. 27. All three concerts served as Hurricane Re­lief concerts, donating money to the Florida State Music Education Association. The idea to have these concerts gather donations is cred­ited to freshman flute player Sarah Galassini.

The concert opened with Dr. Carl Bradley on the organ, perform­ing the classic “Toccata and Fugue in D Minor” by Johann Sebastian

Bach. Next on the roster was the Op­era Musical Theatre En­semble performing the “Ice Cream Sextet from Street Scene,” in which the performers themselves got to enjoy a cone. Their bit continued after the String Orchestra with a rendition of “I Am the Very Model of a Mod­ern Major-General from Pirates of Penzance.”

Between the Opera Musical Theatre’s per­formances the String Orchestra performed. The String Orchestra is new to the university as they were first formed this year. The ensemble performed “Waltz of the Wicked” as well as a rendition of “Thriller” by Michael Jackson.

The second half of the concert was taken on by the Wind Ensemble. The first three pieces they performed stem from the Star Wars Saga with “The Battle in the Forest,” “Princess Leia’s Theme,” and “The Imperial March (Darth Vader’s Theme).” Next the ensemble played “Harry’s Wonder­ous World from Harry Potter and the Sorcer­er’s Stone.” Finally they ended the concert with “Danse Dibolique..”

Afterward, there was a carni­val hosted outside the Performing Arts Center that offered popcorn and cotton candy, the game corn hole, face painting by Art Department Chair Stephanie Chambers, and booths that were set up by Mis­sion Emphasis Week.

On Friday Oct 28. the Criminal Justice Student Association and honor society Xi Omicron co-hosted a “Murder Mys­tery” in the Lord Conference Center of Parker. The fake murder mystery for the night supposedly took place at the university. It was up to students participat­ing to solve clues and interview suspects to figure out “who dunnit.”

Those participating were assigned a character who would work to solve the mystery. Characters included Little Red Riding Hood, Princess Belle from “Beauty and The Beast,” and Hansel and Gretel.

The next day on Sat­urday, Oct. 29 the Band Cru hosted Halloween Headquarters, which is a haunt­ed house in Presser Hall. Band students transformed all the floors of the building into a specific spooky theme that got scarier the farther up the stairs that visitors went.

Scares were not the only thing that happened at Halloween Headquarters. Snacks and games were also provided for those who were brave enough to venture the haunted mansion. Dressed-up band students hoped to catch travelers off guard and scare them inside the building.

The last Halloween event took place on Halloween day, Monday Oct. 31, as College View Apartments hosted the annual Zombie Apocalypse. Pre­viously named Zombie Run, the event is a campus wide game of tag, in which students chose to either to sign up as a “zombie” or a “runner.”